I was speaking with a friend about our experiences with interviewing and hiring. He once interviewed a woman and asked her what mistakes she had made and what she had learned from them, a fairly common interview question. “I haven’t made a mistake,” she responded.

That would be the end of any interview for me. That woman demonstrated she wasn’t self-aware enough to know what mistakes she had made, much less learned anything from them.

We all have unique strengths and weaknesses, and if you want to grow as a leader, you need a firm grasp on what yours are. The single best way to grow as a leader is to be truly self-aware. As Benjamin Franklin said, “Observe all men: thy self most.” 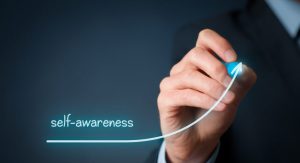 Once you know your own strengths and weaknesses you can leverage and maximize your strengths to the best of your ability. As for your weaknesses, identify the ones you can improve on and take steps to improve those skills. Then hire people who excel in those areas you have identified as weak for you.

I’ve written about the Disney brothers before in Famous Sibling Partnerships That Worked. Walt Disney, the more famous of the two, was the visionary. The creator of Mickey Mouse, the most famous mouse in history. But his vision would never have become a reality without his co-founder, his brother Roy, who was the money guy and the one who made Walt’s visions a reality.

The results of a study done by Green Peak Partners and Cornell’s School of Industrial and Labor Relations in 2010 emphasized the quality of self-awareness and its importance for a leader. The study examined 72 executives at companies with revenues from $50 million to $5 billion.

One of its findings? “Leadership searches give short shrift to ‘self-awareness,’ which should actually be a top criterion.  Interestingly, a high self-awareness score was the strongest predictor of overall success. This is not altogether surprising as executives who are aware of their weaknesses are often better able to hire subordinates who perform well in categories in which the leader lacks acumen. These leaders are also more able to entertain the idea that someone on their team may have an idea that is even better than their own.”

Erika Anderson is a business coach and writer and says when people with low self-awareness want to grow, “it’s like someone who wants to travel to New York and he thinks he’s starting in Philadelphia – but he’s actually in Botswana.  The steps he would take to get to New York, thinking that he’s in Philly, will definitely not work for him (that pesky ocean is going to be a big shock).”

It’s only by being brutally honest with yourself about your own weaknesses that you are able to find people to fill in those gaps to help your company grow. I have an entire section in my book, “How Not to Hire a Guy Like Me” on leveraging the talents of others to your advantage. It’s critical when growing a business, which is why you hear that interview question about strengths and weaknesses so often.

Knowing herself even helped a World No. 1 professional tennis player.  “I think self-awareness is probably the most important thing towards being a champion,” said Billie Jean King.

One thought on “Want to Grow as a Leader? Become This”