It was shocking news. After eight decades of ownership, the Graham family sold The Washington Post to Amazon founder Jeff Bezos for $250 million. The announcement stunned everyone, from The Post employees to the media industry.

You have to hand it to them. They kept their courtship of several potential buyers and the impending sale a secret, despite employing some of the best investigative reporters in the country.

Publisher Katharine Weymouth, who is Katherine Graham’s granddaughter, wrote to the staff, “This is a day that my family and I never expected to come. The Washington Post Company is selling the newspaper it has owned and nurtured for eight decades.” 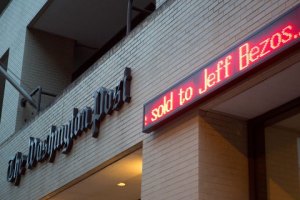 Her uncle, Donald E. Graham, Chairman and CEO of The Washington Post, said, “I, along with Katharine Weymouth and our board of directors, decided to sell only after years of familiar newspaper-industry challenges made us wonder if there might be another owner who would be better for the Post (after a transaction that would be in the best interest of our shareholders).”

It takes courage to admit that you may no longer be the best person to run any business, much less one that has been in your family for generations.

It’s a hard truth and one I’ve had to relate to some of my turnaround clients who have nurtured family businesses for years. It’s tough to tell them that the best thing they can do for the family business is to let it go. It doesn’t matter how many years the family has owned it, how much it meant to Grandpappy, or how tough it is that your generation is the one to lose it. Sometimes if you want a company to survive, the best thing to do is sell it.

It may be time to sell if the heirs that are available in the next generation of management either do not want the responsibility or do not have the capability to run the business successfully. Maybe you’ve received a large offer, one that really is too good to refuse. In both cases, it’s a win for the family to sell the company.

Sometimes the current ownership of a family business just isn’t able to handle the changes in the industry and can’t find a way to keep the company financially viable.

That seems to be the case for the Post. In the first half of 2013, the company lost $49.3 million. Circulation has declined for seven years in a row. The Post has been slow to embrace the digital revolution. It has the fewest digital subscribers and lowest ratio of digital subscribers to print subscribers of any of the top 10 U.S. newspapers, according to an article in Mashable.com.

Bezos may be just what the company needs. Associate Editor Bob Woodward, the Pulitzer-Prize winner for his exposure of Watergate, said in an article in thedailybeast.com, “It’s very sad. But if there’s somebody who can succeed, it’s Bezos. He’s the innovator, he’s got the money and the patience, so we’ll see. I think in some ways, this may be the Post’s last chance to survive, at least in some form of what it was.”

As Donald wrote in the letter to staffers, “The point of our ownership has always been that it was supposed to be good for the Post. As the newspaper business continued to bring up questions to which we have no answers, Katharine and I began to ask ourselves if our small public company was still the best home for the newspaper …. We were certain the paper would survive under our ownership, but we wanted it to do more than that. We wanted it to succeed.”

That should be the goal for any company. Not just to exist but to succeed. And sometimes the best way to ensure that success is to hand it over to someone else.