It’s one of the most debated topics in leadership. Are leaders born or made? Judging from the millions of articles and thousands of books written on how to be a good leader, we must all believe on some level good leaders can be made. A Google search on “leadership skills” turns up 491 million results.

Business leader and author Erika Andersen has been interviewed many times about business and said she is asked that question every time. And she says the interviewers already have made up their mind, generally coming down on the side of believing leaders are born. “They assume that some people come into this world with a natural capacity to lead, and everybody else doesn’t, and there’s not much you can do about it,” she said in the article “Are Leaders Born or Made?”

This concept is in line with a leadership theory called The Great Man Theory, which first became popular in the 19th century, spurred by Scottish writer Thomas Carlyle. People believed leaders like Julius Caesar, Abraham Lincoln and Alexander the Great were born to become great leaders. 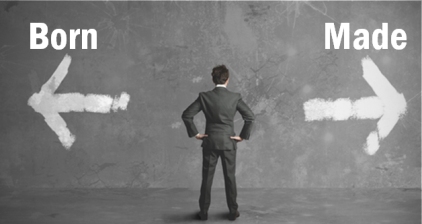 Later that theory declined in popularity, led by the famous European intellectual Herbert Spencer, known for coining the expression “survival of the fittest.” He wrote, “You must admit that the genesis of a great man depends on the long series of complex influences which has produced the race in which he appears, and the social state into which that race has slowly grown …. Before he can remake his society, his society must make him.”

Then we have football coach Vince Lombardi, who knows a thing or two about winning. After all, his Green Bay Packers won five NFL Championships, including two Super Bowls. (But I’m not rooting for them this Sunday. Go Falcons!)

He comes down on the side of leaders being made: “Leaders are made, they are not born. They are made by hard effort, which is the price which all of us pay to achieve any goal that is worthwhile.”

An article in Inc.com that lists 20 traits of born leaders claims that leadership is a skill anyone can develop, but being born with these 20 traits, which include being extroverted, confident and decisive, makes developing that skill a lot easier.

Ronald E. Riggio Ph.D, discusses the topic in the article “Leaders: Born or Made” in Psychology Today. His answer? “To cut to the chase, the answer is: ‘mostly made.’ The best estimates offered by research is that leadership is about one-third born and two-thirds made.”

Past studies have shown that effective leadership is about 30 percent genetic and 70 percent developed. Those percentages were the premise of a study done at University of Illinois by professors Kari Keating, David Rosch, and Lisa Burgoon. They used a scientific approach to teaching leadership in a 15-week introductory course. They claim students made significant gains in their ability to lead, skill levels and motivation to lead. They tracked 165 students and found their progression followed a specific path, based on their being “ready, willing and able.”

“It’s a three-legged stool,” said David Rosch, one of the professors involved with the study. “Students first become ready to learn about being a leader; then they become willing to learn the skills necessary to practice leadership; and finally they’re able to lead because they have the skills and the motivation to do it. You can’t really move on to the other legs of the stool until you’ve achieved a certain amount of this readiness.”

This is all good news for anyone wanting to improve their leadership skills. Maybe you were born with many of the innate skills of a natural leader. But even if you weren’t, research shows you still have 70 percent to work on in becoming a better leader. Sounds like pretty good percentages to me.