I enjoy reading “The Ethicist” column in the New York Times each Sunday. People ask the columnist, currently Chuck Klosterman, questions like “Should I get a flu shot so others don’t get sick?” and “Do I have an ethical obligation to stop patronizing a business that has been in trouble for employing undocumented workers?”

Some of the questions are tough and I’m glad I don’t have to answer ones that address issues like problems with cat custody and which of two brothers should donate a kidney to their dad. 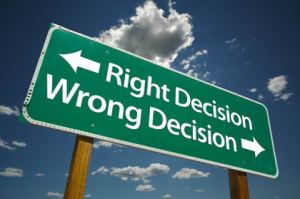 Fortunately, in my business, I’m rarely faced with what I’d call ethical dilemmas. While I do see plenty of questionable ethics, for me they are rarely dilemmas because the answer is invariably clear on what course of action to take.

I mentioned in my most recent column, “Trust Your Gut,” that I turn down work if I am asked to do something unethical. I have never regretted it.

When you consider what is at stake in involving yourself in something wrong, it’s an easy choice. First, it’s wrong. And secondly, why would I risk my reputation for a short-term salary, no matter how large?

I subscribe to what a former client, Henry Kravis, once said, “If you don’t have integrity, you have nothing. You can’t buy it. You can have all the money in the world, but if you are not a moral and ethical person, you really have nothing.”

In one case I was interviewed to take over as president of a large healthcare business. The previous president had been fired when the board found out that they had overbilled Medicare and Medicaid to the tune of several million dollars.

I knew I had the job, as I was the only person they were talking to and I knew people on the board. The position would pay a lot of money.

My advice was that they had to be up front about the overbilling and develop a plan to pay it back. When I asked how long it would take to pay the money back, they said they had estimated two to three years.

I said, “Go to Medicare and Medicaid, tell them what has happened and that you have fired the president and hired me and then present the plan on how we will pay them back.”

Their response? No. They had decided that the downside of admitting the problem was too great, so they did not want to notify anyone and weren’t planning on paying the money back. But they would bill correctly going forward.

I was stunned. My initial response, which I may or may not have uttered aloud was, “Are you crazy?!”

They said, “This is what we are going to do. We want you to start Monday and we need your commitment that you will follow our plan.”

While they saw a path out of their troubles that allowed them to keep millions of dollars of stolen taxpayer money, I saw a group of people taking a very bad situation and making it much, much worse.

Beyond the ethics of the situation, had I been president of that company when the government found out, I would have been held responsible. The choice was an easy one.

In the ensuing years I kept up with what happened to the company. It wasn’t pretty. The government found out about the overbillings and sued the board of directors, CEO and the CFO. They also lost their licenses.

It’s a sad story, but hardly an uncommon one. And I didn’t need to write to “The Ethicist” column at the New York Times for an opinion on what to do.