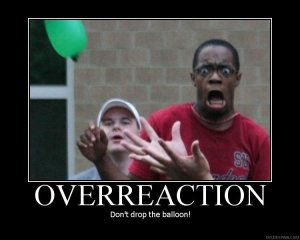 I can appreciate the life philosophy, I really can, but let me tell you: in business, everything that’s small could become big if you don’t pay attention. If I have a cut on my finger and I ignore it and don’t put Neosporin and a Band-Aid on it, my finger could get infected and need amputating (gross). I’m not saying it’s common, but it could happen.

A leader, especially in hard times, needs to make sure he doesn’t overlook the small stuff.

Once, I was installed as CEO of a company, and I relied quite heavily on the CFO who’d been with the company a long time. I listened to his assumptions and projections. However, I never checked up on his assumptions or double checked the formulas in his spreadsheets. It just all seemed like little stuff.

Unfortunately, midway through the turnaround, the numbers headed south and the bankers got upset. As it turned out, the CFO knew about these mistakes and what was likely to happen.

Making mistakes is not a problem. Not admitting one’s mistakes and sharing this kind of knowledge with me is a problem. When I found out the CFO had known about these mistakes and never raised his hand, I fired him immediately. These were small things whose impact could have been mitigated a few months earlier, but at this point, I had to go crawling to the bank for an extra million dollars. Fortunately, they were pleased with my decision to fire the CFO.

The controller who had actually been prevented from checking the numbers earlier became the new CFO, and we emerged from bankruptcy.

As a CEO you have to rely on people, but you also have to trust your instincts, question assumptions and double check the world around you. It’s hard to rely on one person. I did so because it was the quickest way to move forward, but I learned from my mistake, and now I go through budgets line by line and question all assumptions, projections and spreadsheets. I take care of the small stuff (without sweating it) in order to keep it from turning into big stuff.

Many CEOs blindly listen to others without question because they need answers and they need them fast, but as a CEO it’s your job to ask twice and then thrice. Take care of your business by taking care of everything, big and small.