I never fantasized about being a cheerleader. But there I was, in a court of law, waving my pom-poms wildly with the rest of the courtroom.

I’ve done a lot of things in my career I never would have predicted. Handing out pom-poms to a judge and to everyone in attendance in a courtroom ranks high on the list of unforeseen events.

Cheerleader Supply was a $65 million a year revenue business, selling cheerleading supplies and uniforms. When the company’s financial situation was in dire straits, I was brought in for a Chapter 11 restructuring. That was early in my career and I learned a lot from working with that company. 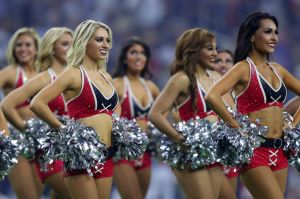 It was a tough fourth quarter at the Super Bowl for Atlanta Falcons fans. But those Falcons cheerleaders never stopped yelling and waving their pom-poms. (Photo courtesy of Yahoo Sports)

With Cheerleader Supply, my job as leader was made easier by the fact that everyone involved wanted to see the company succeed – the judge, lawyers and bankers were all on board with my restructuring plan. It was a lot of hard work, but we made it. On the day we emerged from bankruptcy, I gave everyone in the courtroom and the judge pom-poms to celebrate our win after coming back from so far behind. I still have that pom-pom in my office as a reminder that no matter how tough things get, one of my major roles in working with companies is that of cheerleader.

Dr. Robert Gerwig, who writes the Lead Strategic blog, wrote, “Great leaders are cheerleaders. If you’re not one, start today. You don’t have to be an extrovert to provide encouragement, support, recognition and inspiration. Do it your way, do it authentically, but become a great cheerleader. You’ll be amazed at the results and long-lasting benefits.”

I was recently looking at the bio of the leader of a company and saw this: “John serves as CEO and Cheer­leader for his busi­ness.” That’s a line that should be in every CEO’s bio.

My book “How Not to Hire a Guy Like Me: Lessons Learned from CEOs’ Mistakes,” is now available as an ebook.