Fraud isn’t funny. But some of the failed attempts at fraud can be. Here are my nominations for two people who deserve at least an honorable mention for the Darwin Awards. Neither of their genes should be in the pool.

Like trying to cash a check for $360 billion. In 2008, a 21-year-old man in Texas went to a bank in Fort Worth with a check, claiming he needed the money to start a record company and his girlfriend’s mother had given him the check. That would have been enough money to buy just about any record company he wanted, along with all the rights to every Beatles, Michael Jackson and Elvis song ever recorded. 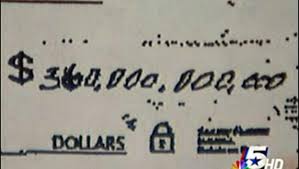 See anything suspicious about this check? (AP Photo/KXAS-TV)

But the tellers at the Fort Worth bank were just a bit suspicious of a check with 10 zeroes in the number. A call to the girlfriend’s mother confirmed that suspicion. She did not give him the check. My guess is she also did not have $360 billion sitting in an account. He was arrested on a forgery charge.

A woman in Georgia had a few less zeroes in mind when she filed a fake tax return, claiming an income of $99 million. She claimed she was due a refund of $94 million. Revenue agents wrote a fake check of their own, issued to Brigitte Jackson for $94,323,148 and told her to appear at a bank inside a supermarket to cash it.

Brigitte showed up, visions of riches in her head. But instead of leaving with the cash, she left in handcuffs, charged with attempted theft by taking and conspiracy to defraud the state.

While these instances are comical and easily spotted, most fraud is not and can go on for years, costing your business millions of dollars. The Association of Certified Fraud Examiners estimates the money lost by businesses at over $3.5 trillion a year.

In my years in the turnaround industry, I have seen dozens of cases of fraud, many of which caused owners to lose their businesses. It’s rarely this blatant, which means as a CEO or business owner, you have to be ever-vigilant.

March is National Fraud Prevention Month, a good time to access your businesses fraud prevention practices. Here are a few articles with tips on preventing fraud in your business: