Thomas Jefferson is said to have popularized the handshake in Western culture as a more democratic form of greeting. I, and my back, appreciate that we no longer bow when greeting associates. Sounds like an awful lot of work to me.

Now, extending your right hand for a handshake is an important part of our culture and significant in the first impression you make when meeting someone. I’ve written before about the importance of first impressions. In my column, “The First 15 Seconds,” I listed three things I could tell about a person I am interviewing in just one quarter of a minute. 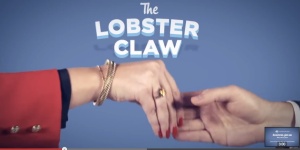 A demonstration of the Lobster Claw, one of the top 10 bad business handshakes as demonstrated in a video of the same name

Another crucial aspect of making a good first impression is that handshake. I got a big laugh out of this video I came across, done by an Australian company called “The Top 10 Bad Business Handshakes.” Maybe it’s even funnier because of the droll Australian accent but it does illustrate several handshakes that will definitely not make a good first impression. These include the Lobster Claw, the Fist Bump, the Wrestler and the Phantom.

Watch the video and see if you fall into any of those 10 categories of bad handshakers. If you have the slightest bit of concern that you may, here are a few tips from David Gregory at NBC on the “Today” show.

• Have a firm grip

• Shake once of twice from the elbow

• Should last about three seconds.

Those three seconds of contact can really pay off. An interesting study done by the Income Center for Trade Shows found that people are twice as likely to remember you if you shake hands with them. They will also be more open and friendly with you. People whose handshakes are evaluated as good are seen as extroverted and emotionally expressive, according to an article in Forbes.com on “Why Women in Business Should Shake Hands.”

Here are a few of the tips the writer Carol Kinsey Goman shared in the article, which apply for both men and women.

• Be the first to extend your hand.

• Stand when being introduced and extending your hand.

• Say something like “It’s great to meet you,” before you let go.

• When you let go, do not look down. That is a sign of submission.

In another study, researchers Frank Bernieri and Kristen Petty screened 300 students, selecting five men and five women with contrasting personality profiles. Their job was to introduce themselves to people of the same sex, who were playing the role of the interviewers.

The interviewers met with five “candidates” who introduced themselves briefly. Half of the time the greeting involved a handshake. The interviewers then rated the candidates on extroversion, neuroticism, openness, agreeableness and conscientiousness.

The one area where the handshake seemed to really make a difference was in conscientiousness, particularly when men judge other men. The researchers concluded that engaging in a handshake could help you predict whether that person would show up for their next appointment with you.

Hard to believe, isn’t it? How much you can tell about a person in an act that takes three seconds. Make those three seconds count in your favor.